The remarkable rise of Rate Money is showing no signs ofslowing down. Each branch is now settling an average of $9m every month, with new branches continuing to open across the country. This is a remarkable result considering the majority of branches are in their first 12 months of operation

THE RISE and rise of non-bank lender Rate Money has been nothing short of phenomenal. Founded by a highly experienced team of three mortgage professionals (with a combined 50-plus years of industry experience) in 2019, it identified that the mainstream lending market had major flaws for self-employed applicants. So, Rate Money set out to provide support to this segment of the market by developing new and innovative ways to help the self-employed people of Australia – commonly referred to as the backbone of the Australian economy.

It was a masterstroke. This niche market was incredibly undervalued by the lending industry. Even though 20% of Australia’s workforce is said to be self-employed, this is still seen as a niche market. 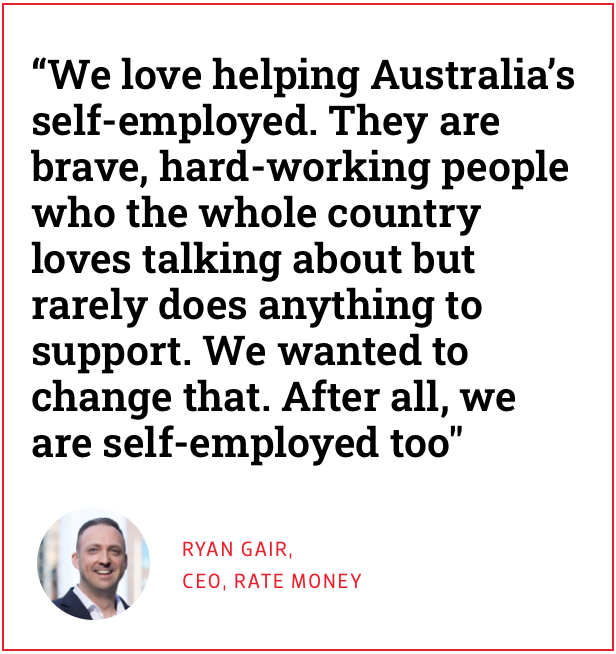 Rate Money CEO Ryan Gair says, “We love helping Australia’s self-employed. They are brave, hard-working people who the whole country loves talking about but rarely does anything to support. We wanted to change that. After all, we are self-employed too.”

The growth Rate Money has experienced in the last 18 months has been nothing short of miraculous. Taking, as Gair says, “a long, hard look at ourselves and our brand”, the company refined and honed its offering, its products and its overall brand to great effect. The brand ethos of Rate Money is to provide self-employed Australians with the home loans, respect and service they so richly deserve. And it appears that the Rate Money brand refresh has been a hit throughout the country.

In August last year, Rate Money broke the magical $1bn mark in settlements after just 18 months of trading. Even more remarkable is that, just six months later, Rate Money has doubled that amount, reporting total settlements of over $2bn.

Rate Money’s network of branches is expanding into many other parts of the nation. In just over two years of operation, the company now has 21 branches covering NSW, Vic and Tas, with a further three branches opening across NSW and Vic in February.

“One of our main focuses this year is expanding our presence into Queensland. We want to ensure that we are providing a solution for all self-employed applicants up and down the eastern seaboard. We are receiving leads on a daily basis from applicants in Queensland. It’s vital that the hard-working self-employed people of Queensland are aware that we are able to provide them with a solution to their financial needs,” says Gair.

There is still plenty of room for growth. Let’s face it, Australia is a big place, Gair says. “In the last three months we’ve seen a surge of enquiries from people within the industry looking to become the next proud owner of a Rate Money branch. It’s exciting to see and perfect timing to welcome more people aboard as we’re forecasting another outstanding year. By our forecasts, we expect to double the number of branches by the end of 2022, as well as doubling our settlements in the same time period.”

Rate Money is by definition bespoke. With highly innovative products and a new and improved custom-made CRM on the way, the company offers new branch principals simplicity from day one. And the Rate Money board continues to make things even better for branch principals. Rate Money is investing heavily in the business to fast-track new and innovative products and processes to not only ensure that those within the business are able to function with ease and stay ahead of the competition but, importantly, to give its self-employed customers the best loans and service they can possibly find. With an outstanding digital advertising campaign aimed at driving new customers to Rate Money’s branches this year, finding customers hasn’t proved difficult for its branch principals – both old and new.

Talk to us today about your home loan needs.

The Self-Employed feel right at home

Self-Employed specialist, Rate Money, has undergone huge growth despite only setting up in July 2019…

Rate Money exceeded $1 billion in settled loans in May, while settling $120 million in June…

The specialist lender to Self-Employed Australians, was delighted to announce the milestone …

Australian Broker talks to twelve industry leaders, who reflect on the challenges and achievements of 2021…
Loading...